We can design future worlds - reel from Bradford L Cooper on Vimeo.

The Sound Healing Symphony from Bradford L Cooper on Vimeo. 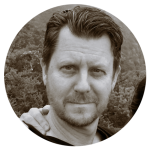 Bradford L. Cooper, filmmaker. Brad grew up on the East Coast in Connecticut. In 1988 Brad was chosen for mentorship by commercial photographer Richard Daily and soon after started working for renowned architectural photographer Robert Benson. In 1989 Brad was also beginning a career in electronic music which he is still involved with to this day.

At the end of 1995 Brad relocated to Los Angeles, California and in 2000 fully joined the digital filmmaking revolution.

Adopting Final Cut Pro and various Panasonic, Canon and Sony cameras Brad shot his first feature in 2004 and began a very successful career as an independent film-maker. Regular clients in the last 12 years include Zoom, Avid, Line 6, Environmental Defense Fund, Kaiser Permanente, Academy of Motion Pictures Arts and Sciences, UCSF, USF, Crown Equipment Corp as well as Mini Cooper, BMW, UNICEF, and many others. In 2014 Brad shot a mini-documentary for the Fiat-Lux Eye Foundation in Kenya, Africa. On many of these projects, Brad served as Director of Photography and on many occasions Editor as well.

Brad has never lost his interest in still photography and is hired several times a year for photography work examples include 2018’s series of articles on art collectors in Los Angeles for Artlink magazine based out of South Korea.